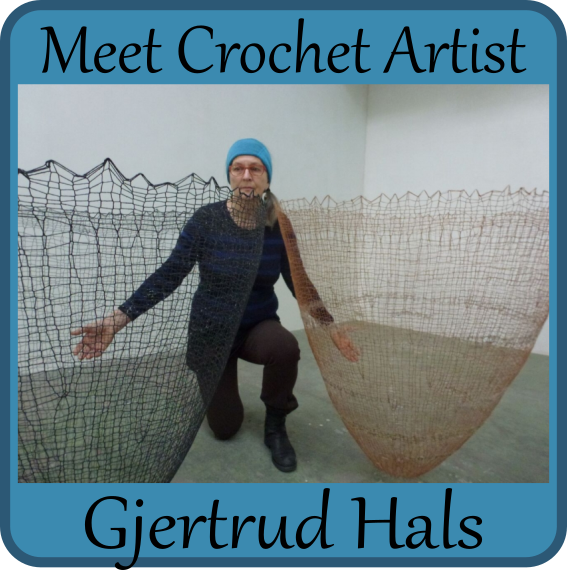 Gjertrud Hals learned how to crochet at the age of five, taught by the women in her family. Now approaching her 70s, she has been working as a professional artist for almost half a century, and she has consistently incorporated yarncrafting into her work.

Gjertrud was born and raised on a small island off the coast of Norway, a home that has greatly influenced her work. She is keenly interested in the history of this small island and how that history relates to the wider history of the world. Understanding and expressing this connection is a thread that runs through most of her pieces. She is intrigued by the fact that Norway was one of the poorest nations in Europe at the start of the 19th century and is now one of the wealthiest. Her work frequently incorporates symbols of Norse mythology. She says,

“Like life itself, the mythological symbols are complex, profound and interesting, not easy to quite catch or understand in the here and now. Relating to my country’s history and mythology is a way for me to deal with what is happening in today’s world.” 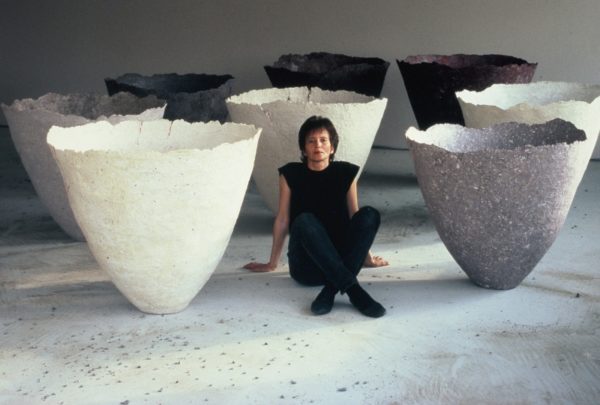 Gjertrud is a multimedia artist working in fiber art. In addition to crochet, she frequently uses knitting and tapestry weaving in her creations. Of course, over the years she has used many different materials, including paper, resin and even optic fibers. She doesn’t have a favorite material, preferring to select whatever serves her artistic expression at any given time. That said, a big turning point in her work came in the late 1980s when she created a series called Lava—a set of one-meter tall urns made from cotton and flax pulp, a creation that marked her transition into fiber art installation.

Lava incorporated the form of the shell, which has always been a very powerful symbol in her work. She says, “It is a symbol that encompasses several meanings; it represents the proactive membrane between life and death, and it is a symbol of the jar or vessel.” We see both the recurring theme and the growth in her work when we compare Lava with her 2015 series titled Ultima, a series “of one-meter tall vessels that were knitted from cotton and linen threads and then hardened with resin.”

Gjertrud shares that making art is the way that she expresses herself, giving order to chaos, “writing poems,” if you will with her materials. She tends to work with simple crochet stitches, but she will learn new techniques if the work calls for it. She says, “I am always thinking: ‘What do I want to express here and how can I do it?’ Sometimes I use a technique that I know and sometimes I must teach myself something new.” 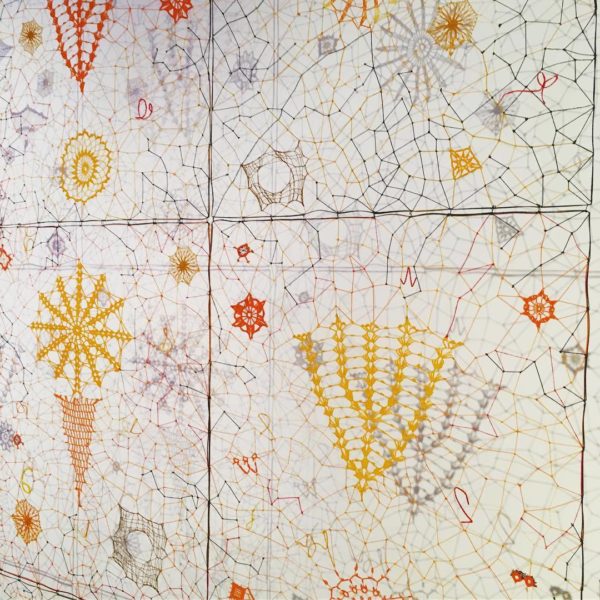 One of the pieces that best represents Gjertrud’s hometown is called Coral Sea. She created it based on a childhood memory of net fishing on the island. She says, “Sometimes when we would draw in the nets there would be big coral attached to the net. We called them ‘sea trees.’ When they first came up, the coral had bright colors but after a while these would fade away. Today scientists say that the coral reefs are threatened; huge areas have turned gray including some on the Scandinavian coast.” We can see how this is a distinct expression of how her own small island interacts with the rest of the globe, and how the work is an expression of working through the impact of climate change. 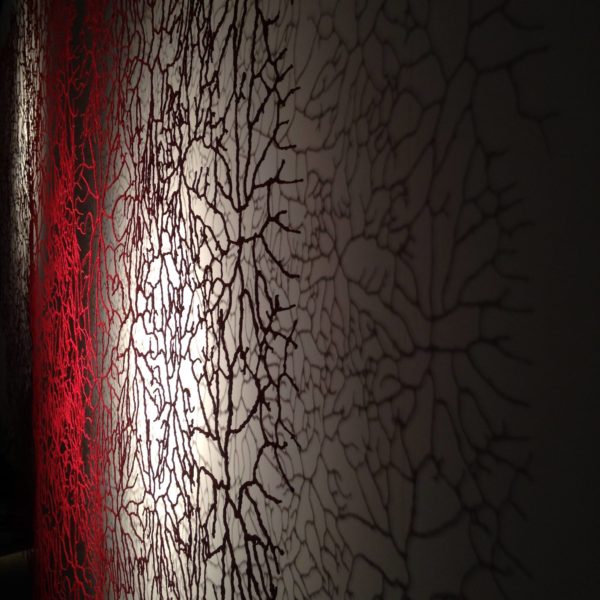 If you haven’t heard of Gjertrud before, take a moment to get to know what this crochet artist does. She had her first group exhibit in 1975 and has since had more than 30 solo exhibits of her work in addition to group exhibitions. This body of work is incredible and inspiring. It shows that with just basic crochet stitches and your own imagination, you can express all of yourself to the world around you.

This is a guest post by Kathryn Vercillo, author of several books including Crochet Saved My Life and Mandalas for Marinke. Kathryn blogs about the health benefits of crafting at PsychCentral.

Powered by WordPress  |  Compass by InkThemes.

Never miss a post! Enter your name and email to get the latest articles, tutorials, and contest information... it's FREE!

CraftsCrazy is C-R-A-Z-Y about Crafts! Subscribe now for updates on your favorite crafts, from knitting and crochet to scrapbooking and quilting!
Your information will *never* be shared or sold to a 3rd party.